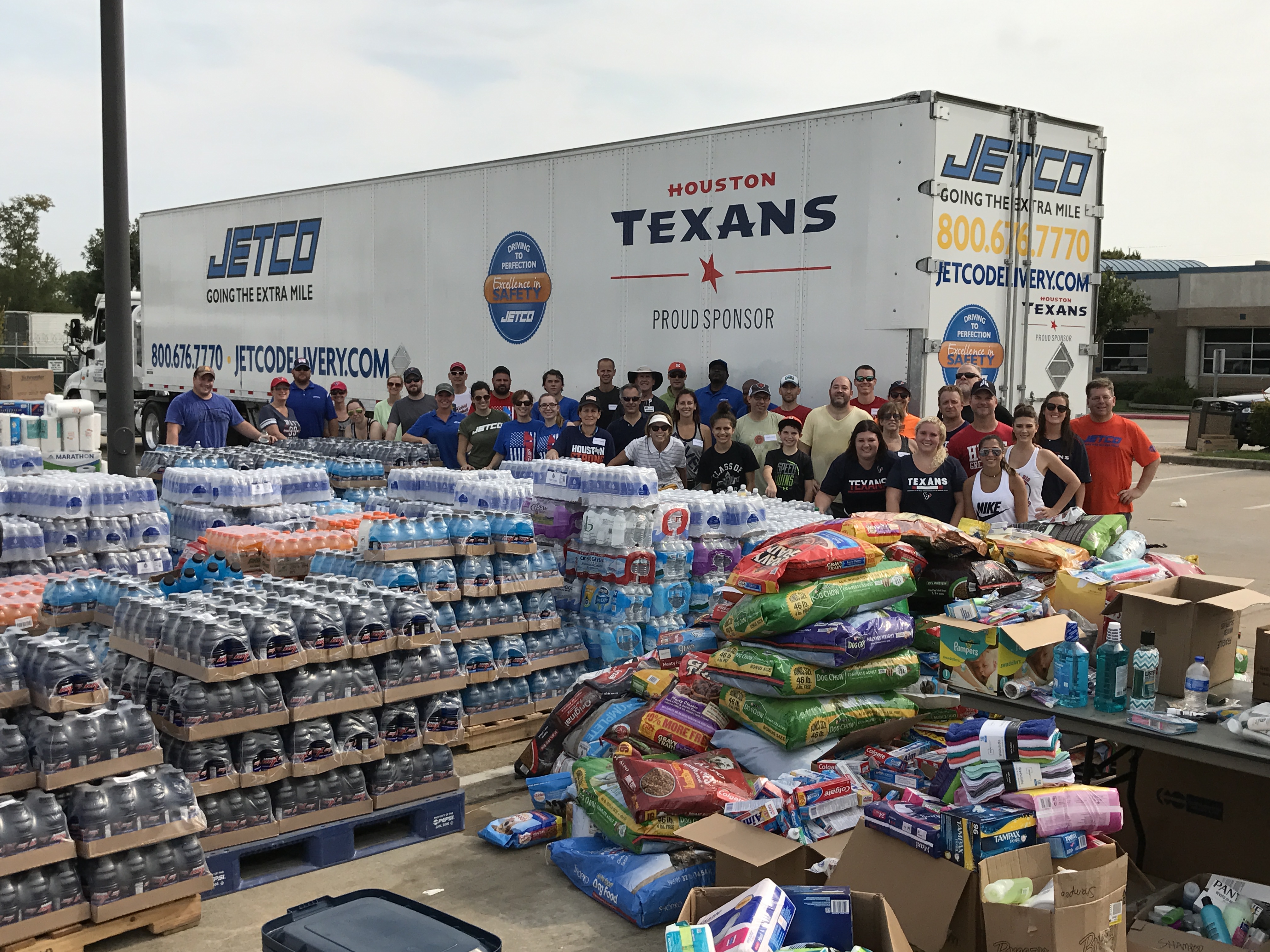 This time last year Hurricane Harvey made landfall in Texas and would mark a day in history that would leave Houstonians changed forever. Houston showed the world that nothing would hold us. This tragedy brought the city closer and showed the world what it looks like when a community comes together to support one another.

Jetco was ready to help. Our team pulled together to not only help the community, but to also support our own team members who had been affected.

Only a day into the storm, there was an urgent need for rescue boats to help stranded citizens, and when Jetco received a call from Governor Abbott’s office asking for help, we were quickly there to assist. Three members of our team braved the torrential downpour to move the boats 40 miles from a location on the north side of the city to the Bass Pro Shop in Katy, Texas, where the National Guard was staging their home base.

Our driver, Pedro, arrived at Bass Pro Shop and was greeted with incredible appreciation. The store team outfitted him in full rain gear before he, Jeff McKinney, Jetco’s safety director, and Lisa Sursavage, Jetco’s director of marketing and public relations, made the trek to pick up the rescue boats. Over three hours later, the Jetco team made it back to the staging area, where the National Guard helped them unload the boats before taking them into the city for rescue operations. That day, Houston Mayor Sylvester Turner had reported 189 critical rescues that needed happen.

“Being thanked and given rain gear to wear made me feel appreciated. I knew that we were doing something that was meaningful. People’s lives were saved because of those boats.”

That was the beginning of Jetco’s heavy involvement in Hurricane Harvey relief efforts. Rain continued to pour for several days, but support across the city was needed, and many streets were completely submerged. Yet, that didn’t stop the Jetco team from stepping in and helping wherever possible.

On Tuesday, August 29, we received a call from Mayor Turner’s office that United Airlines was shipping meals, blankets, pillows and bedding to the airport, and they needed a professional truck driver to pick them up and deliver them to the George R. Brown Convention Center (GRB) – which had turned into the safe haven for those displaced by the hurricane. Again, Jetco team members stepped up.

Our driver, Robert, arrived at the airport and his trailer was loaded with supplies. In the meantime, Lisa, Jetco’s director of marketing, had safely made her way to GRB where she was waiting to help volunteers there unload Robert’s truck upon his arrival.

When Robert arrived, it was emotional for everyone. People were desperate for food, clothing, and bedding, and Robert’s truck was loaded with items they needed. He received a warm welcome from everyone who was volunteering to distribute the items in his trailer.

“It was a devastating scene. I was honored to be able to help in any way.”

On Thursday, August 31, we received another call from Mayor Turner’s office that Southwest Airlines was flying in first-responder relief supplies for the Houston Police Department: 5,000 cans of mosquito repellent, 400 pairs of wading boots and thousands of pairs of socks. Billy Vest stepped up to the plate to pick up and deliver the supplies.

When he arrived at HOU, the Southwest team unloaded their plane and loaded up Billy’s trailer. With a police escort to help him navigate the closed or flooded roadways in and around downtown, Billy made his way to Uniform Supply where he was greeted by a large group of Houston police officers who unloaded all of the supplies. HPD officers formed an assembly line to take the boxes off the truck, then they separated out the various items by sizes.

“It was so nice to see so many people working together, and the HPD were really thankful for everything I delivered.”

“It’s an honor to help and represent Jetco. It was such a hard time for so many of us, yet helping others was what, I think, got us through the storm. Working with our drivers to supplies where they were needed was beyond rewarding. I’m really proud of our team.”

Like most other companies in Houston, we had team members who lost everything. Cheryl Fielkow, our accounting manager, and Jetco president Kyle Kristynik’s wife, Tiffany, organized a fundraising campaign to raise money and accept donations for those Jetco team members who were in need.  Because of the generous donations from our team, we were able to provide clothing, food and other supplies to our Jetco families.

Words cannot convey how proud we are of our team for their dedication to helping the Houston community throughout Hurricane Harvey. Thank you to our team to the entire city for supporting one another during this time: you are appreciated, recognized, and respected for your selflessness to help the city of Houston.